The End of Everything 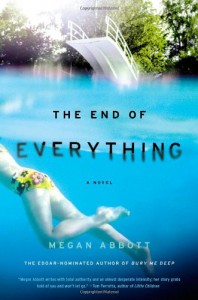 "" Savoring my war wounds, I sit, and feel I deserve rich rewards. Spotting my mother's secret Benson & Hedges pack crammed into the wet dirt of a gangly potted geranium, I think about pulling one out and lighting up. Evie and I did it once. It hurt our throats, but the good kind of hurt. That's what we said. Are there cigarettes in every backyard, every garage, every toolshed or bird feeder?""

This is a book that you have to take your time with. You may believe that you can steamroll your way through it given that it is a ""coming of age"" story involving ""young teenage girls"", but I am telling you right now, there is plenty more to it than typical teenage drama. If you skim through a page you will soon realize that you're lost in the passages, but you haven't missed anything at all, if that makes any sense. There's love, yet hate. Fear, yet wanting. Victimization, yet appreciation. Confusion, yet complete understanding. With a beautifully-confounding trance like prose you feel that you are always trying to catch up with the author as you read her story, yet in reality she's there running at your side. Never getting a firm grasp of the truth you realize that maybe it's for the best and the odd obscurity wouldn't do that much harm. This story exemplifies the destructive nature of people's ""little"" secrets.

Evie Verver and Lizzie Hood know each other bone deep. The two of them are blood-thick and are at the most of times inseparable. As neighbours, school mates, field hockey teammates and best friends they are about to embark on an experience they've been waiting all year for. Together they are on the cusp of young adolescence as they enter high school after their upcoming Summer vacation. They also share some common, yet circumstantial family dynamics. Lizzie has a father living in California while Evie has a mother who is physically present, but emotionally far far away. Ghostly figures in a place where they are there in body or correspondence, but not there in body or spirit. From another point the two friends have distinct differences with their other residing parental figure as: Lizzie's mother seems more concerned with a married doctor than her own daughter while Evie's father goes above and beyond the amount of attention he pays his children. It's easy to see why Lizzie spends most of her time at the Verner household and how fascination of the Verner family has extended far past Evie.

"" 'I don't know,' she says. 'There's always just been something about them...' There's almost a blush on her, like she's been caught without her clothes. She can't quite look at me.' 'I don't know,' she says. 'Like something had to break. It could only go on for so long, before something had to break.' 'That doesn't make any sense at all,' I say, shaking off a flinch deep insiee. 'You're not making any sense at all.' ""

They still do childish things like having sleepovers, playing bloody murder, telling secrets, and enjoying fireworks with family. But they are extending their focus to more present needs such as experiencing their sexual infantilism, playing ""boycrush"" games, an awareness of the other sex, and deep emotional conversations. All is the same, just different. On one seemingly innocuous day everything changes. Hidden faces are revealed, thoughts and feelings are shared, but questions remain unanswered.

Unattainable fathers and girls and attainable daughters and men. The idea that one youthful teenager can become an object of fantasy for a man from nearby, plainly with her elemental purity and her inherent effervescence. Evie has a magic about her that makes people stand, watch, and take note; something concurrently that has made Lizzie crazy about her friend, her family and their illuminating beings. Without warning, Evie starts disengaging from Lizzie. Unfortunately for Lizzie she didn't realize until it was too late and she may never know why.

To have all the time in the world to be in adult, your life as a child is short lived. Once you lose it, it's hard to get back. Innocence of youth, corruption of adulthood. The most wonderful of all things can be the most complex to fully understand. Men's hunger for sex supercedes all other motivations especially when you primarily have a secret longing to relive a misspent youth. As young adults you want your lovers to be wild and free, as adults you want stability. Consistency can be more than fine even if it's not as fun. The making of something pure, innocent, and beautiful and making it tarnished, sick, disturbed, and soiled. As disturbing as some of the content may seem I get the feeling that there is plenty to be learned about love and living with regret. As teenage characters adjust to their final hours as young innocence, men and woman are living with the idea of lost love and true desire. There is a distinct feeling of desperation from beginning to end. As some are waiting for their first kiss, some are waiting for something more physical as immoral as it may be.

""What did it feel like to her, seeing him there, trapped in his shadow, him leaning over as she sat on the bed? Evie, she had a jaw that clicked when she opened her mouth wide or when she ate sometimes. When he kissed her, did he hear it click, like a cocked gun? Did she open her mouth wide, like an animal, for him and did he hear it click like the say safety on a gun?""

Reminded me of the innocence and mutually-beneficial relationship between Guy Montag and Clarisse McClellan in Fahrenheit 451, Ted Demme's Beautiful Girls with Natalie Portman as the object of affection, Koethi Zan's best friends forever quandry in The Never List and even to a lesser degree with a slight reversal of roles, Nabokov's Lolita. The search for truth through innocence is one that is difficult to swallow in a lot of ways for a lot of people, but one I can see as being mutually agreeable if the hearts and minds are in the right place. I also believe that children have just as much ability to positively influence the lives of adults as adults are made to do with children. This does not have to be a one sided relationship, but there are obvious boundaries that must be respected. Protection, not destruction of spirit is always the name of the game, especially when it comes to our youth.

The author tip-toes on touchy subjects that has the effect of water torture. How could one drop have that much psychological impact? This book will challenge you, but I believe it is a book that treats reprehensible behaviour in a different kind of light. Haunting and interesting, I recommend it.

""When I told Evie about it, in the quiet of our sleeping bags, she didn't say anything for the longest time, but I could hear her breathing. Then she said sometimes the ways boys need things so badly, like they could never stop needing, it almost scared her. But, she said, sometimes I feel like that too. She said, Lizzie, do you ever find yourself wanting so much you feel like you might disappear? Like all that you are is the wanting, and the rest of you just burns away?""